I was about six years old when I was taught how to play the game of chess move the chess pieces on the board. It was just as casual as the other board games (Ludo, Monopoly, Snakes&Ladders) we played back then; after losing most of my early games to big brother, I lost interest in the “boring” game. I started playing again later in my junior high school days when I stumbled upon my first chess book. That piqued my interest enough to delve into the theory behind the game, I devoured all the chess materials I could lay my hands on and in no time I became the strongest player in my high school. I went ahead to represent the school at various interstate competitions at that level. I also represented my college during my undergraduate years at the NUGA games, winning Gold and Silver medals for the OAU chess team.

Over the years, I have come to learn a lot about the game of chess, the players and how the basic principles of the game simulates our everyday life in so many ways.

The game of chess: This is undoubtedly the most intelligent board game ever created; Theophilus Caiaphas (erstwhile president of the Nigerian Chess Federation) defined chess as ‘the ultimate mental combat and battle of wits’. From the moment you make the first move till the last one, your aim is to outsmart your opponent by sheer mental strength, sneaky tricks and deceit or whatever arsenal you have in your mental armory. The great thing about the game is that there is no such thing as luck per se; both players have the same pieces to work with and the outcome of your game depends on how well you manage your pieces and their positions on the board. Your win will also be aided by mistake(s) from your opponent, be it an outright blunder or a slight inaccurate move. If no player makes any mistake then the game will be drawn.

There are so many books written on different aspects of the game and studying theory on chess will increase your playing strength and give you advantage over a player who studies less. It is the ultimate mind game, a great chess master once called chess aboard game where ‘1% of the battle is on the board and the other 99% is waged in the mind of the players’.

Some people are of the opinion that chess is very scientific, considering the fact that it involves a lot of calculation of variations on the chess board; it also involves following certain principles to achieve a good game. On the other hand, Gary Kasparov (the greatest achieving chess player of all time – a living legend) argued that chess is artistic as well, in that the player must be creative enough to develop the position he desires on the chess board and there are times in the game where the strength of a move is not based on the number of calculated moves ahead but a certain intuition and “feel” for the placement of the pieces. This is where humans demonstrate superiority over computer chess engines.

The players: I have had the privilege of associating with a number of chess players and I have observed that the stronger players have (or have developed over a period of time) sound analytical abilities and strategic thinking, not only on the chess board but also in everyday life. This is just one of many traits common among chess players. Personally, playing chess over the years has played a significant role in shaping my perspective on certain aspects of life; indulge me as I explain a few of the principles and lessons from chess that I often apply in real-life situations for better decision making.

In a chess game, both players start with equal opportunities; same number of pieces and the same position. Although the player with the white pieces makes the first move, the one with black is only a move behind to equalize. The same could be said about life, although the color of the “pieces” which life deals us differ, every individual has what it takes to make the best out of the life given him.

In chess I also learned that:

“A faulty plan is better than having no plans at all”. This applies in life; the most wretched of men are those who wake up every day with no vision of which course they want their lives to take. A faulty plan can be corrected and nurtured along the way but without a plan for life, a man is like the flaky reed buffeted around by the winds of circumstances. Man, this paragraph sounds so Shakespearean!

“When you see a good move, look for a better one”. Sometimes in life, good could be the worst enemy of better. Because an option seems good does not mean there is nothing better out there, the day you stop striving for a higher goal, a better place, is the day you stop growing.

“Some part of a mistake is always correct”. So is it in life too, there is a lesson to be learnt in every mistake and a mistake becomes a failure only when you ignore the lessons that could be learned. Make the best of your errors in life; turn it around if you can, but if not, learn from it and move on.

“The hardest game to win is a won game” In a won game, you have all the advantages on the chess board and all you need do is maintain focus and finish the game but that is when there is a high tendency of you getting cocky and your opponent gets more tricky. Overconfidence is not a good trait, even the Holy Book says ‘He that thinks he stands, take heed lest he falls’.

“To avoid losing a piece, many a person has lost the game” This is what happens when you fail to see the big picture, sometimes you have to lose a battle to win the war. There are some things you hold on too tight to that must be let go in order to achieve your goals in life.

“Winning isn’t everything… but losing is nothing” ’Nuff said, I love this one.

I could go on about the basic principles in chess and how they apply to life but time and space would not permit that luxury. Even though I do not play chess as much as I used to, most of what I learned from the beautiful game of royalty is ingrained with me and I live by some of these parallel principles. Do yourself a favor and learn how to play the game today and if you already know how to play, play more. 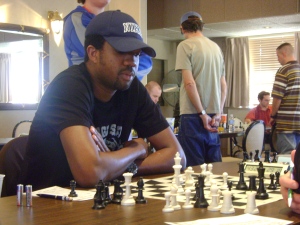 6 thoughts on “Playing with the Kings: Life Lessons from the Royal Game of Chess”